One of the more perplexing brickwalls I've encountered in my genealogical researches into my paternal ancestors has centered on the great-grandparents of Josiah Todd.

Josiah was born on 17 Dec 1778 in Bertie County, North Carolina, during the War of Independence. He moved to Edgefield County, South Carolina, in 1805, where he raised family with his first wife Nancy Asbill and, upon her death, with his second wife Zilpha Thomas. After service in the War of 1812, he moved in 1817 with his second wife to Collirene, Lowndes County, Alabama, where he later died on 11 Aug 1853.

My recent Y-DNA 111 testing results from FamilyTreeDNA has revealed an unexpected ancestral plot twist, we could call it, but it may answer the question of why no one has been able to source – or, at least, to convincingly document – the paternal ancestors of Josiah Todd earlier than his grandparents Thomas Todd and Charity Hardy.

My Y-DNA testing results also correlate with the genealogical findings of Richard McMurtry, whose intensive DNA compilations suggest that Josiah Todd’s ancestry represents a Todd family group that is American born but with no known immigrant progenitors, nor is that group related to any of the other Todd families living in the Americas at that time by following Y-DNA lines.

What’s going on, and what are our roots? The Y-DNA test results show that there seems to have been a Goforth fox in the Todd henhouse in the second, or possibly third, generation prior to Josiah Todd!

My test results confirm that I have substantial Y-DNA matches with members of the Goforth family, as do the two other William Josiah Todd descendants who have also taken the FamilyTreeDNA Y-DNA test, and they also show these same Goforth matches. 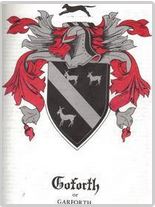 William and Anne Goforth arrived in the New World aboard the fly-boat “Martha” on 18 Oct 1677, settlers for the new Quaker colony in the area which later became Burlington and West New Jersey on the Delaware River, about 30 miles above the site on which Philadelphia was founded five years later, in 1682, by William Penn

One genealogist from the Goforth clan suggested that the latter son above, Thomas Goforth, might be a good candidate to explore. The records concerning his life burned in a fire, and no subsequent research has been done on him. However, the other sons, though officially married, must also be considered as candidates.

When William Goforth died, his wife Anne would later remarry another member of the immigrant passengers on the “Martha,” a man named William Oxley, and with him would settle in Philadelphia. This may be significant since one of William Josiah Todd’s sons, Lewis (brother of Josiah and Henry Hardy), would later marry an Oxley (related only by marriage rather than blood).

Of interest is that Anne Skipwith Goforth Oxley has documented lineage back to King Edward I, and therefore back to the original lords of the Norman Conquest.

This revelation of genealogical origins doesn’t, of course, diminish the percent of ancestral Todd DNA but simply routes those chromosomes through the mother rather than the father. Since this Todd DNA line doesn’t appear to belong to one of McMurtry’s classification of 200-plus other Todd DNA family groups living in America at the time (our group is classified as Todd Family Group 158 by McMurtry), this (great?-)grandmother of Josiah’s would have come from Todd immigrants not yet identified.

My working hypothesis at this time is that the Todd line of immigrants would likely have arrived after 1677 (when the William Goforths arrived in the Colonies) but before 1710 (the earliest possible date of birth for Josiah’s grandfather Thomas Todd). And a promising course of inquiry would lie in trying to identify locations where Todd families overlap with Goforth families during this window of time.

Mark and Kym Todd are volunteers on WikiTree, a project to create the entire human tree.
Profiles, sources, and documents for individuals described above are on WikiTree:

Kym-n-Mark Todd
Fiction authors and nonfiction journalists with a passion for exploring the past and the present. Current focus: genealogical adventures.